Commissioner Linda Sherwood was born in North Tonawanda, New York. She moved to the Hollywood area in 1961 with her parents and younger sister. She enjoys being a mother to her four children and a grandmother to her four grandchildren.

As a resident of Hollywood for 60 years prior to being elected to the commission in 2008, Commissioner Sherwood worked as an oncology R.N.  Following her retirement from nursing she became increasingly involved with government working in the Hollywood office of her state representative and creating a non-profit organization to help senior citizens find employment. 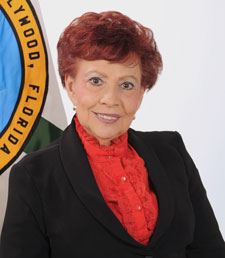 Since becoming Commissioner for District 6, she has worked for the welfare and safety of others. Here are several of her accomplishments and projects she has supported.

• Promoted improvements on State Road 7 and Hollywood Boulevard.
​• Acquired funding for the Washington Park Day Care Center and multiple other organizations within the City.
​• Advocated to keep bus transportation routes.
​• Pushed for parking at Zinkil Park.
​• Facilitated new landscaping within her district.
​• Helped start the 441/Hollywood West Business Association.
​• Awarded the Woman of the Year 2010-11 Award on behalf of the Washington Park Homeowners Association.
​• Awarded the “Woman of Leadership” Award from the South Florida Ballet Theater and from the Ellis Foundation for Leadership.
​• Appointed to the Broward League of Cities Legislative and Advocacy Committee, August 2010, 2011 and 2012.
​• She was voted by her colleagues on the City Commission to serve a term as Vice Mayor.
​• In May of 2015 she received the Chief’s Special Recognition Award in support of Public Safety in Hollywood.
​• In 2016, 2018, 2019, 2020, and 2021 she supported and promoted the Hispanic Unity VITA Project and received a Certificate of Appreciation from KAPOW (Kids and the Power at Work) for her support, dedication and service.
​
​As a concerned citizen of Hollywood, Commissioner Sherwood has also given her time in several volunteer efforts, here are some of them:
​• Volunteers as an Eucharistic Minister at Nativity Catholic Church
​• Beverly Hills President of Corp. #2
​
​Commissioner Sherwood continues to work closely with new and upcoming projects, as she did with the recent Wal-Mart project which has revitalized the area. She continually focuses on the City’s economic development and is dedicated to Hollywood’s financial success.