Commissioner Caryl Shuham was born in Baltimore, Maryland and obtained a Bachelor of Science degree in Civil Engineering from Johns Hopkins University. She went on to obtain her Juris Doctor from the University of Maryland and has worked as an attorney for more than 30 years representing companies engaged in the construction industry. She and her husband, Marty, are partners in the law firm of Shuham & Shuham, P.A. in downtown Hollywood. Commissioner Shuham is Florida Bar board certified in construction law.

Volunteering in the community has always been important to Commissioner Shuham. Currently, she serves as a Women of Tomorrow mentor at Hollywood Hills High School, an officer on the board of the North Beach Condominium Association and previously served on the City’s Dune Master Plan Task Force. She is a graduate of Leadership Hollywood and has served in leadership roles within the Broward Public Schools Partners in Education program, the JCC Book Festival and the Crohn’s & Colitis Foundation Take Steps Walk. Additionally, Commissioner Shuham is a member of the Hollywood Women’s Club, the Hollywood Historical Society, the Art & Culture Center of Hollywood and the Lion’s Club of Hollywood.

Commissioner Shuham and her husband have been married for 35 years. They are the proud parents of three sons: Simon, an aerospace mechanical engineer; Matt, a journalist; and Ben, a physician. 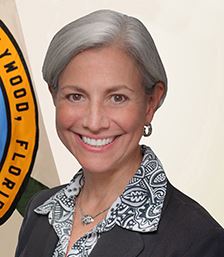