Mayor Josh Levy is honored to be re-elected as the mayor of our city through to the year 2024.  Josh grew up in Hollywood.  He graduated from Hollywood Hills High School in 1992. He attended the University of Florida where, in 1996, he earned a Bachelor of Arts in Political Science. Josh went on to earn a Law Degree from Nova Southeastern University where he graduated with Pro Bono Honors and a Certificate of Concentration in International Legal Practice.

Mayor Levy began his volunteerism with the City 22 years ago, when he served as a law clerk in the City of Hollywood City Attorney’s Office. Years later, he was appointed by the Hollywood City Commission to serve as a member of the City’s Planning & Development Board, a position which Mayor Levy held for twelve years.  Mayor Levy also served for years as the President, Director and Education Committee Chairperson of the Hollywood Hills Civic Association.

Mayor Levy is a graduate of the Greater Hollywood Chamber of Commerce’s Leadership Hollywood program, the Hollywood Police Department’s Citizen’s Police Academy and is a recipient of the City of Hollywood’s Great Neighborhoods Challenge Community Spirit Award.  He serves on Broward County’s Tourist Development Council and as Chair of the CareerSource Broward Council of Elected Officials.

Mayor Levy looks forward to working with his colleagues on the City Commission to make the City of Hollywood South Florida’s top city to live, learn, work, invest, and play.  Through conducting ourselves with integrity, professionalism, a spirit of innovation, teamwork and a sense of pride, we will fulfill our purpose and mission – to provide a thriving community, where quality living is available to all.

Mayor Levy thanks his family and the entire community for entrusting him with the honor of serving as the city’s chief elected official. 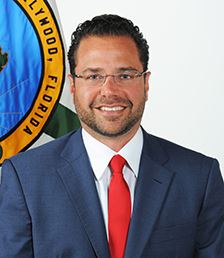