The Records and Archives Division maintains numerous historical photographs, artifacts and documents, many of which have been donated to the City of Hollywood over the years.


"The Mightiest Hurricane in the Nation's History," a first hand account of the Hurricane of 1926, original manuscript by Martha Rose Scott, who was 12 at the time of the hurricane. 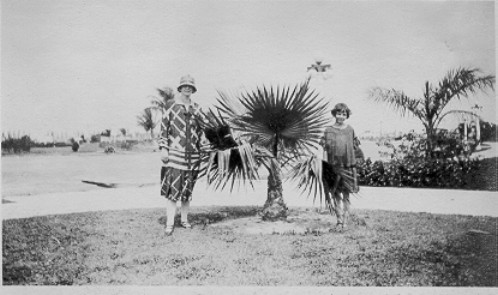 Martha R.S. Baum, whose maiden name is Martha Rose Scott, moved to Hollywood in 1926 at the age of 12 and resided in a beachfront apartment north of the Hollywood Beach Hotel. Her father, Harold Leroy Scott, had moved the family to Hollywood to become manager of Smartclad Men's Shop, located in the Hotel. The Scott family experienced first-hand the catastrophic events caused the by the devastating hurricane which struck Hollywood the evening of September 17, 1926.

Unable to evacuate, the Scotts and other families sought shelter in the strongest building on the beach, the Hollywood Beach Hotel. After the hurricane, Martha's family, like thousands of others, became part of the great exodus from Hollywood. Shortly after her return to Indianapolis, Martha wrote about the hurricane in a national newspaper for children. The typewritten pages of her vivid memories were later bound in a volume entitled "The Mightiest Hurricane In the Nation's History", with illustrations provided by her mother, Nell W. Scott.

Seventy-five years later, Martha R.S. Baum donated to the City her original manuscript, along with over 100 photographs and original Raggedy Ann doll and story book she clung to throughout the storm.